As inflation continues to cast a shadow over the economy, restaurants are turning to an age-old marketing tactic to keep customers coming in the door.

Barbell pricing—the practice of simultaneously promoting both high- and low-priced menu items—has made a comeback this year as operators look to appeal to two sets of customers: those who are hurting from inflation and those who aren’t.

“It’s a way of being able to talk out of both sides of one’s mouth,” said John Gordon, restaurant analyst with Pacific Management Consulting Group.

Mentions of “barbell” have spiked on earnings calls this year. Executives of at least eight publicly traded chains uttered the term during the most recent round of quarterly updates, according to data from financial services site Sentio. Between 2018 and the start of this year, “barbell” had surfaced just a handful of times, a sign that the strategy is gaining steam. 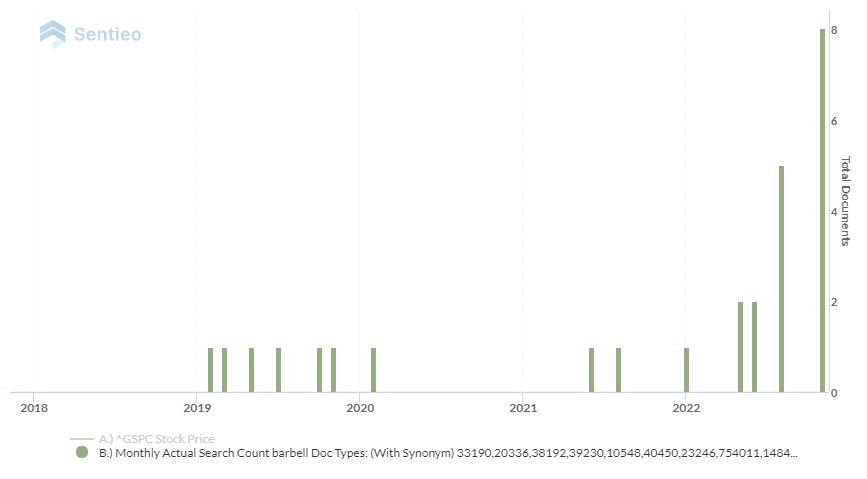 Restaurant executives have been talking about barbells quite a bit this year. Source: Sentieo transcripts of 14 publicly traded restaurant chains

It comes as restaurants try to strike a difficult balance between generating traffic and protecting margins. By offering traffic-driving deals alongside pricier items, restaurants hope to capture customers on both ends of the spending spectrum while also encouraging trade-up.

“How do they want to spend whatever discretionary income they have?” former CEO Paul Murphy said in June.

The two-pronged approach mirrors the tale of two consumers that has emerged this year. Lower-income Americans have been most impacted by inflation, while higher earners are behaving normally or even spending more: New data from OpenTable found that sales of restaurant meals over $50 are up 8% this year compared to 2019.

In that environment, more traditional discounting can be counterproductive.

“You don’t want to surrender the average check,” Gordon said. “If you only talk about discounts, then ultimately you’re going to have a big mix shift down, and you’re going to take it in the shorts on average ticket, and that would be disastrous.”

Papa John’s echoed that philosophy on its recent earnings call while noting that inflation has been weighing on demand. In response, the chain rolled out a $6.99 mix-and-match deal geared toward price-sensitive guests.

“While we saw competitors undertake aggressive discounting, we continue to take a balanced approach, providing the right promotions to our value-oriented customers without risking the erosion of our brand or pricing integrity on our more premium offerings,” CEO Rob Lynch told analysts earlier this month, according to a transcript on Sentieo.

The same dynamic has been on display at Chili’s, which has actually cut back on discounts recently to help build sales. And while it continues to promote a 3 for Me value menu starting at $10.99, it has tightened it up to entice guests to jump into higher tiers (like a $15.99 sirloin steak) or onto the full-price menu.

CFO Joe Taylor admitted that the approach has hurt traffic, but it has added profitable sales.

“We think that’s worth the tradeoff,” he said.

Members help make our journalism possible. Become a Restaurant Business member today and unlock exclusive benefits, including unlimited access to all of our content. Sign up here.