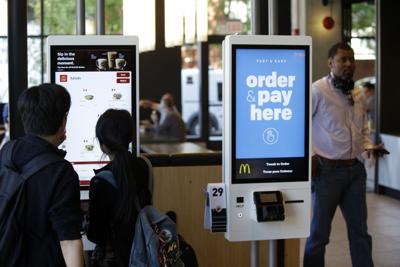 McDonald’s Corp. has pitched self-ordering kiosks as a key part of its plans to boost sales by improving technology and renovating restaurants. But it turns out the kiosks aren’t usable by a significant slice of McDonald’s customers: cash payers.

The Big Mac seller is leaning hard into digital ordering and technology improvements to attract on-the-go customers, but a recent test shows the kiosks may need to be replaced or retrofitted to accommodate cash transactions. About 6.5% — or 8.4 million — of U.S. households don’t have a bank account or a debit or credit card, preventing them from using McDonald’s kiosks that are in about 9,000 domestic locations.

That’s problematic for the company because franchisees have been bearing much of the cost for renovations that include the kiosks and creating a more modern look. Many restaurant owners have already having paid as much as $750,000 per store for the kiosks and other improvements.

“As part of McDonald’s efforts to identify the best experience for customers and employees, we are always testing new approaches to meet customer demand,” the company said in an emailed statement. It confirmed it’s testing kiosks that accept cash in a “small handful of U.S. restaurants.”

The kiosks, which started being used in the U.S. in 2015, quickly became a focus of recently departed Chief Executive Officer Steve Easterbrook, who said last month that touchscreen ordering is increasing worldwide. He noted that diners usually spend more when ordering via kiosk, and said in July that 40% of in-store customers used one in Australia and major European markets.

“Potentially the franchisee could have to pay,” said John Gordon, principal at restaurant adviser Pacific Management Consulting Group. He called the oversight for the kiosks a “mistake” and said the world’s biggest restaurant company “should have thought about that.”

He estimates that 30% of fast-food customers use cash in the U.S. McDonald’s says that worldwide, 40% to 60% of its diners use cash.

“Lower income people just don’t have access to credit cards; they’re paying with a lot of things in cash,” Gordon said. “Why should they not have the same access to personalization, or to get in and out quickly if there’s a line?”

McDonald’s says the kiosks offer a faster ordering experience and that some cash-paying customers have said they want to be able to use them.

Cashless restaurants, including Dos Toros Taqueria, have faced criticism that they discriminate against low-income consumers who may not have bank accounts. Amazon.com’s Go grocery markets and the Sweetgreen salad chain reversed their no-cash policies earlier this year.

Cities and states are starting to ban cashless stores. Philadelphia and San Francisco have such rules in place now, and other municipalities are weighing similar measures.