by John A. Gordon, Principal and Founder of Pacific Management Consulting Group

We heard it quite frequently mentioned last quarter in restaurant earnings calls: the effect of weather. Any restaurant veteran knows it matters, but how much and over what period of time? Weather does matter, but it impacts unequally and sometimes in short bursts.

Research says that retail spending is positively influenced by sunlight, lower humidity, higher barometric pressure and higher temperatures. [1] 2.3% of retail sales levels are said to be influenced by weather. [2] One alternative now present is online sales, which jumps during bad weather, which can be both good and bad for restaurants.

Bad weather can shut down virtually outside all human activity. Other than running out of food at home, we know there is no biological survival imperative to eat at restaurants; it is typically both impulse and planned occasion driven in nature, with both kitchen replacement and social/entertainment as prime motivations. But it represents superior convenience and positive for socialization. Over the last several decades, the ratio of food spent away from home has surpassed food spending at home. That is great for us; the problem is that spending is spread over more and more establishments in the US. 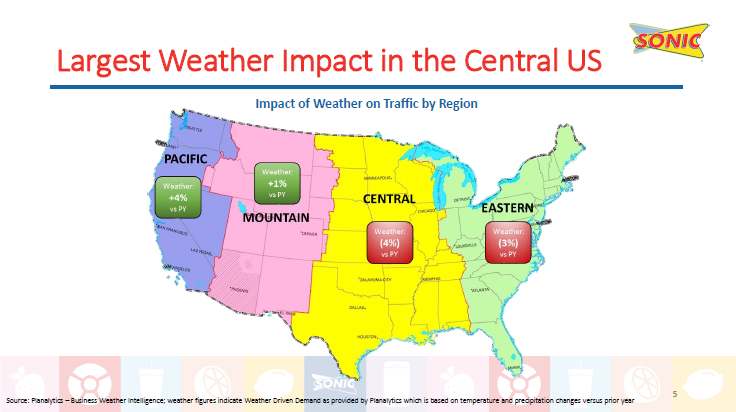 There are several good weather analytics firms, such as Planalytics, The Weather Channel and more. I’d suggest that restaurant prediction models be more calibrated over time to account for the presence of drive-thrus, delivery, dense urban/CBD walk-in store mix (that is more impacted by the potential to walk in) and menu diversity as explanative factors.

Restaurant executives on the spot to explain what has happened in and why should be wary to overuse the weather factor. After all, almost all of the comparisons are versus prior year, and weather happens and is embedded in early month’s results. Unlike the retail demand for a winter coat, restaurant desire is more evenly spaced. Too much mention of weather blends in with empty earnings call words such as “it performed up to our expectations” and “we’ll make our projection via second half of year excessive performance”.