Skip to content
For most of its 50-year history, Subway enjoyed nearly uninterrupted unit growth on its way toward becoming the most prevalent restaurant chain in the world. But, after five years of customer count declines in its vital U.S. market, the Milford, Conn.-based sandwich giant is trying a different tack: shrinking.

Company executives said in an interview with Restaurant Business they expect more closures in the near future as the chain employs data to determine the viability of each of its nearly 26,000 U.S. locations. The company also predicts a number of its restaurants will be moved to new, better locations—Subway expects to relocate 1,000 of its global restaurants this year, half of them in the U.S.

In addition, the chain foresees as many as 15% of its franchisees selling restaurants to multiunit operators who want to expand—potentially shifting ownership of thousands of locations.

The effort could have a major impact on the sandwich giant’s size and franchisee ownership. But executives believe it’s an important element to help the chain improve unit volumes and profitability.

“It’s a really big shift,” CEO Suzanne Greco says. “We have an opportunity now to really, if nothing else, stabilize where we are. This is just the beginning. More will be coming out. But we’re at a period where people are very optimistic that we’re at a turning point.”

Subway is coming off a difficult stretch in which it lost two key players: its founder, Greco’s brother Fred DeLuca, to cancer, and its longtime spokesman Jared Fogle to prison. But its broader problem has been what Greco calls “a slow erosion of customers.”

Subway’s traffic has fallen 25% since 2012, a decline that put a brake on that uninterrupted growth.

Last year, according to Technomic’s Top 500 Chain Restaurant Advance Report, Subway’s system sales in the U.S. declined 4.4% to $10.8 billion—its lowest level since 2010. Its unit count declined by 3.1%, to 25,908. It was the second straight unit count decline after more than 20 years of increases. The chain has closed 1,200 locations over the past two years.

“With anything new, like a brand transformation, that means change,” Greco says of the chain’s relations with franchisees. “When you change things, people get concerned and there’s debate. Our key strategy is to open up our lines of communication and listen to them. 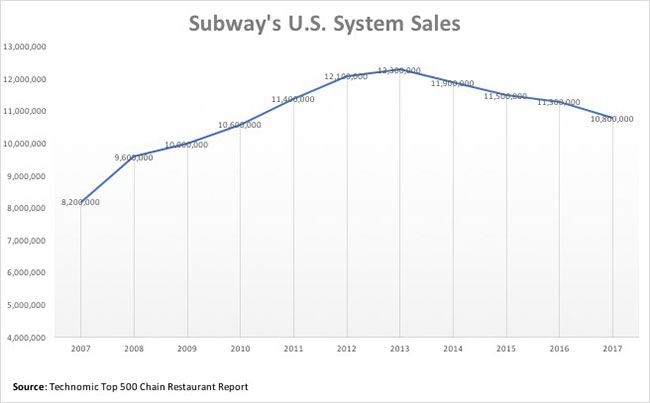 Greco took over as CEO of Subway in 2015. She had been involved with the chain since 1973, when she started as a sandwich maker, and had held various roles with the company. But after DeLuca’s 2013 leukemia diagnosis she was given more and more responsibility, ultimately becoming only the second CEO in the chain’s history.

“When I came on board, we had a huge challenge, with the passing of Fred,” Greco says.

Already hurting from the loss of customers, the company was ready for some change. Subway performed an evaluation of its business, and looked at how to turn it around, she said, knowing that the down traffic meant starting from a tough spot.

“We were already losing customers when we started our transformation,” Greco says. “That makes it even more difficult to turn around.” She said that if the work had started before the “slippage,” the company might be in a better position today.

“We are where we are,” she says. “But we’re doing some exciting things.”

The persistent declines in traffic and sales have left the chain with unit volumes that are low—at just over $400,000—for such a large company. While Subway has been built to be profitable even with low volumes, the sales have put pressure on the chain while leaving many of its franchisees in danger of going out of business.

A chain that once helped destroy Quiznos by simply adding toasters is now at the mercy of its smaller rivals.

Subway largely stopped adding new units after Greco’s arrival in 2015. That alone was a major shift. Operators have said that in the past they were given little choice but to build new units near their existing restaurants because if they didn’t, others would.

The company’s focus now is on “same-shop profitability, rather than location growth,” says Don Fertman, Subway’s chief development officer. Under Greco, the company developed its own modeling software, using a mapping program to assess individual locations. It is analyzing stores to determine which would be best to relocate, sell to other franchisees or close.

Subway “is working closely with franchisees on relocation,” Chief Business Development Officer Trevor Haynes says. “It could be 25 feet away. It could be across the street or down the street or put into a freestanding location with a drive-thru.”

Operators who relocate into new facilities with a better footprint “are seeing phenomenal results from that action,” he says.

Subway did about 500 such relocations in 2017. Fertman says the chain expects to double that in 2018, with about half of the moves in the U.S. 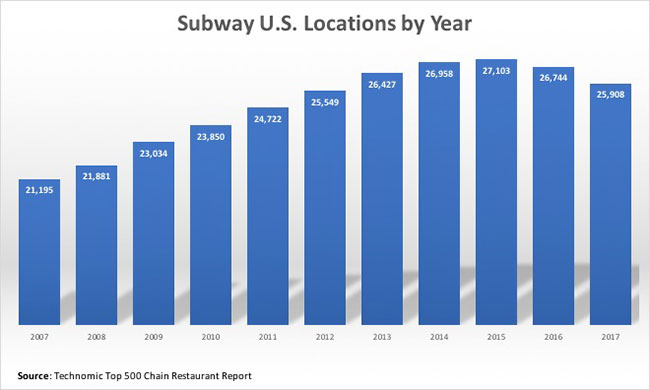 Executives also believe the chain needs to close underperforming locations. “We think there will be additional closures,” Fertman says. How many is uncertain. But the company believes that a smaller system will ultimately be stronger.

John Gordon, a restaurant consultant out of San Diego, believes that culling locations is an important step for Subway to improve unit volumes.

He says the company’s willingness to accept a unit count decline is somewhat surprising. “Typically, this is something the franchisor will fight until the cows come home,” he says.

While some units may close, many others could change hands. The company surveyed its operators and asked whether they would prefer to expand or stay where they are—or downsize or exit. Of those operators, 15% said they wanted to downsize or exit—that would represent at least 4,000 stores, if that were true systemwide and every operator had one location.

“Now we’re going through the process of matching them up with multiunit operators who want to expand and have an opportunity to acquire additional locations over time,” Fertman says, expecting there to be “more consolidation over time.”

Executives emphasized the system will still feature small, one-unit operators. “Some of those people are some of the hardest-working operators we have,” Greco says.

The company also expects new franchisees in the system who “come into the Subway system and get excited and bring new energy,” Fertman says.

Subway is banking on remodels, which could be an extensive program, given the sandwich chain’s immense scope. But it could also be challenging, given the restaurants’ low volumes.

There are about 170 Subway locations with the chain’s Fresh Forward design, which highlights Subway’s freshly made ingredients, with displays of the chain’s vegetables and its breads. “We bring the vegetables forward,” Greco says. “Look at the sandwich. Look at the bread. Look at the technology.”

The company has tested kiosks in many of these locations, which would join Subway with chains like McDonald’s and Panera Bread in adding self-order stations. But executives don’t appear to be big on the kiosks, given consumer reaction so far. “They’ll play with the kiosk and then just go talk to staff members and order their sandwich, anyway,” Haynes says. “We have customers come in, play with their order and then don’t complete it and go order it at the counter. It’s like a little gaming.”

He adds, “The mobile phone or portable device is going to be your kiosk.”

The company said it has financing options and has worked with operators to offset the costs of the remodel. Subway also says that the design is available in different tiers and price points, so smaller-volume stores can more easily afford the remodel.

Matt Starr is undertaking a number of the store transformations that Subway believes can help the chain thrive in the future.

Starr has been a Subway franchisee since 1988, and his company owns about 70 locations around the country, about half of which are in the Portland, Ore., area.

Two years ago, Starr took over a Subway in a poor location with an owner who was “tired and disengaged.” With better operations, he says, the store’s sales increased 20% in the first year. And in the meantime, the company found a better location for that restaurant that was “about a 9-iron” away. “Seriously, it’s about a half a block,” Starr says.

That location was opened with Subway’s new Fresh Forward design, and the sales took off. Starr says they are up another 70% over the past nine months. “That store is up 98% over two years ago,” Starr says. “Sales are still building. In January that store was over double the sales in January of two years previous.”

Starr is repeating the process in other locations. One of his business partners took over a high-volume shop in Portland, remodeled that location and has seen sales increase more than 50%.

Starr believes that the remodel is a “major component” of the increase, in part because customers want to stay longer and they are amazed at seeing the company slice its fresh vegetables. “People come in and ask, ‘Do you really slice your veggies?’ That happens at every single Fresh Forward shop,” he says.

Subway’s revitalization strategy includes a number of different elements beyond the remodels, including more marketing earlier this year to promote the chain’s healthfulness. The chain’s primary shareholders, including Peter Buck and DeLuca’s family, invested $25 million into the chain to support that marketing.

Late last year, Subway named Dentsu Aegis Network, a customized team of ad agencies, to handle its creative and media accounts. The company has a new campaign that focuses on the chain’s customization platform and its fresh ingredients.

The chain has also been focused on its digital efforts, including its mobile app and a new loyalty program.

“The brand proposition is just as valid today as when it first opened,” Greco says. “We’re very relevant when we offer fresh, nutritious, affordable sandwiches that are customizable. We just need to get relevant with today’s consumer.”

The $4.99 offer was part of that strategy, part of a way to combat intense discounting in the quick-service sector. But concerns about profitability roiled franchisees and they fought back, petitioning the company to stop the offer.

But the company believes the deal fulfills an important value element. “We still have $4.99,” Haynes says. “It’s another one of the pillars we’re focused on: value, health and indulgence.”

Subway is quietly launching a set of wrap sandwiches, with double the meat, for $6.99, that executives hope can serve a more premium customer looking for something a little different.

And they say the chain still has the health halo, even if Fogle and his Subway diet are no longer part of the brand. “Customers still regard us as a healthier alternative to what other QSRs offer,” Greco says, noting that the chain uses full-grain breads, serves chicken without antibiotics and has removed artificial colors. The chain also has plenty of fresh vegetables. “We’re able to talk about something compelling the other QSRs can’t talk about.” 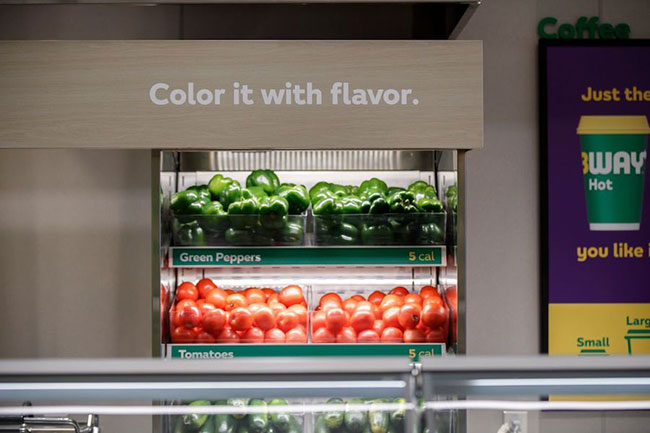 Greco suggests that the company still has a way to go. Subway is still the biggest chain in the world by unit count, and a fix of its sales takes time.

“When you think of the size we’re dealing with, we have the makings of a brand transformation plan,” she says. But Greco believes the company could be at a turning point on its turnaround.

“All of this stuff coming together at once gives us a platform,” she says. “We’re excited about what we have in the future at Subway. We’re a big brand. It took us 50 years to get here.

“Every big brand has to go through rough times. This is not the first time we’ve hit rough times. But things are changing quickly, and we’re doing a lot to get ahead of that.”