Skip to content
Once, they were considered pirates in nicer clothing, a mob of capital-rich opportunists flashing enough cash to buy control of restaurant companies, pillage the assets and then sell at a huge profit—often by cutting muscle along with the fat.

But in the roughly two decades since private-equity firms thundered into the industry, restaurant companies have learned that those capital sources can be valuable partners providing far more than expansion dollars. It’s a matter of finding the right one, as PE firms have followed the natural business law of differentiating in a competitive market.

By all accounts, the PE sector is flush with capital and prowling for deals, but is having a harder time finding good ones, in part because restaurant companies are cagier about selling. Quick-service operators in particular are demanding sky-high valuations and shopping more carefully for ancillary benefits.

The situation is reshaping the PE firm into more of a hunter than a gatherer, tracking particular deals rather than working off a queue. Their focus is on the specific, not the general.

He and others see the firms fitting these broad categories, essentially storefronts for operators shopping for a PE partner.

Union Square Hospitality Group, the restaurant operation that spawned Shake Shack and operates such fine-dining landmarks as Union Square Cafe and Gramercy Tavern, has just started a fund to nurture young fast-casual brands. And The Culinary Edge, a menu consultancy, has done the same with The Culinary Edge Ventures, which has already invested in a single-store concept called Starbird.

All are illustrations of private-equity companies shifting down the size spectrum to take chances on younger, smaller ventures that have yet to prove they can travel and scale up. “Everyone is looking for the next big thing, the next Chipotle,” says Jim Balis, managing director of CapitalSpring, a diversified finance company. The company, which just acquired Brass Tap and Beef ‘O’ Brady’s, has holdings ranging from “Tier 1 QSRs down to truly independent concepts that are regional,” he says.

The incubators, as epitomized by KarpReilly, provide far more than funding. The dollars come with assistance in adjusting the menu, forging systems and processes, building an infrastructure and otherwise prepping the brand for growth. Its successes in that regard have included The Habit, Mimi’s Cafe and Miller’s Ale House.

The clock doesn’t tick as loudly as it once did for private-equity companies. The whole rationale was to buy, fix and flip the brand at head-turning speed, then distribute the money to the fund contributors and do it all over again.

Now, says Gordon, a PE investor might hold onto a chain for a while because of its cash flow or franchising opportunities. A so-called “asset light” brand, where all stores are franchised, enjoys a low overhead and strong revenues—a formula that can translate into high valuations.

Balis says his firm is a case in point, because it doesn’t follow a rapid-fire buy-and-sell formula. “If we find a good investment and it makes sense to hold onto it, we will,” he says. “We want to be opportunistic. We don’t put specific lives around our investments.”

That tendency has given a number of former restaurant executives a second life as private-equity management advisors. “I’ve been a CEO of a number of restaurant companies,” says Balis, noting he currently holds that title at 17-unit Norms Restaurants. “I know how to do a turnaround. I know how to grow something. I know how to fix operations.”

The king of the investor-operator is Roark Capital, whose Focus Brands subsidiary operates such brands as Moe’s Southwest Grill, McAlister’s Deli, Schlotzsky’s, Cinnabon and Auntie Anne’s. Roark bought Jim ‘N Nick’s Bar-B-Q in July, raising its tally of restaurant concepts to 20, and purchased a minority stake in Culver’s in October. It’s only divested of one to date: Wingstop, which is now public. 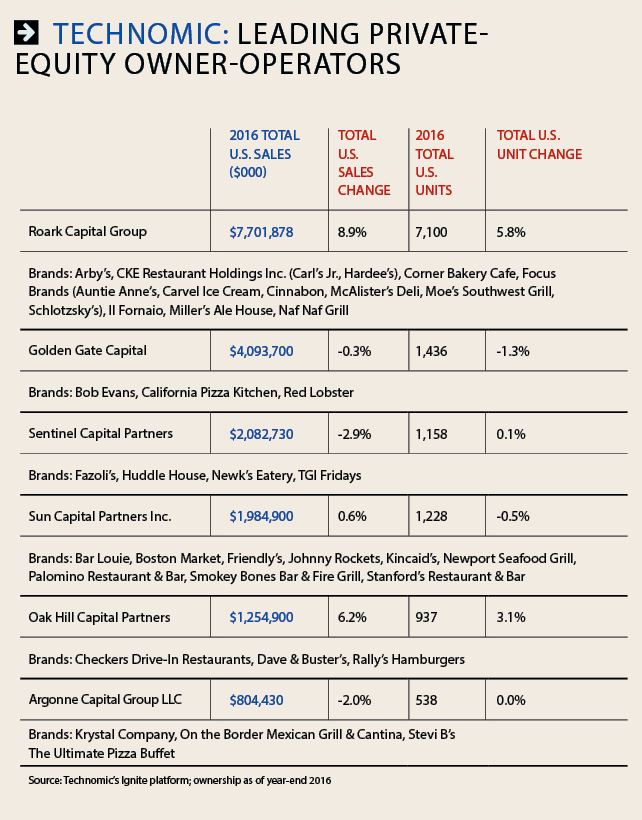 After chasing franchisors and brand owners for decades, PE firms have steadily broadened their scope to include franchisees, notes Gordon. “They see that consolidation is underway, from smaller franchisees to larger franchisees,” he says.

No longer are these just mom-and-pop prey. And they may sport more affordable valuations than the parent company.

Longtime specialists like Argonne Capital, a franchisee of IHOP, Sonny’s BBQ and Applebee’s, is being joined on the hunt for licensees by the likes of Sun Capital, which acquired a 21-unit HuHot franchise last year. Sun has a larger restaurant portfolio than any other PE firm, but CCW LLC is the only franchisee in the mix.

At the high end of the buyer’s market are the multibillion-dollar funds that don’t balk at paying huge multiples for a blue-chip brand. The consummate example is JAB Holding Company, which took Panera Bread Co. private with a bid of $7.5 billion or $315 a share—a 20% premium over the trading price at the time. Analysts say the price equates to a 41- to 46-time multiple of Panera’s  fiscal 2017 earnings.

JAB is used to paying that kind of premium. A year earlier, it bought Krispy Kreme for $1.35 billion, or 19 times the franchisor’s EBITDA. Its portfolio also includes Keurig.